This blog post is by Anjali Vaidya, a grad student working with India Bioscience and a member of the documentation team for Bodystorming Hits Bangalore.

“If you're trying to give the big picture of a big idea, to really capture its essence – the fewer words you use, the better. In fact, the ideal may be to use no words at all.” This was how science writer (and instigator of the Dance Your PhD contest) John Bohannon introduced the idea of using dancers to explain and explore complicated problems in his 2011 TED talk, “Dance vs. powerpoint, a modest proposal,” which doubled as a performance piece with the Black Label Movement. The dance – and talk – came to the National Gallery of Modern Art (NGMA), Bangalore on Sunday April 26th, with the role of John Bohannon reprised by Joseph Crook of the Black Label Movement. 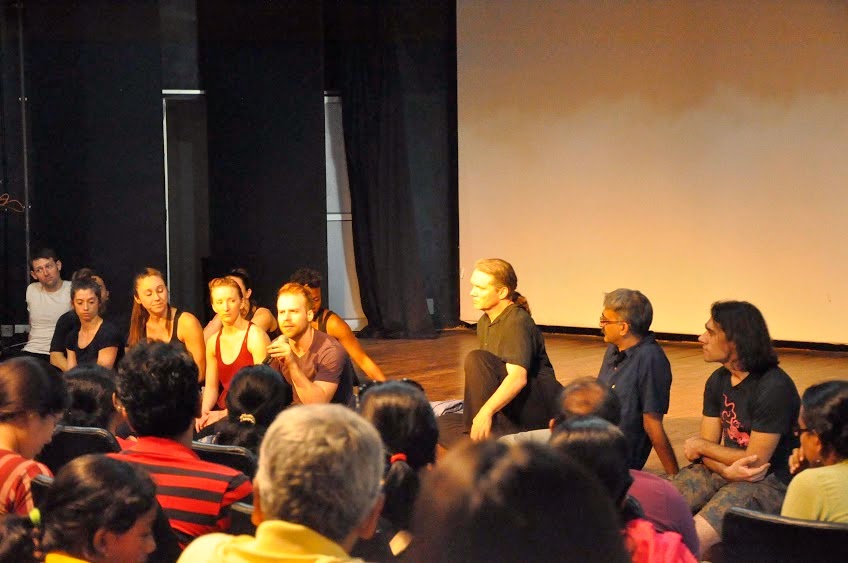 As Crook told the audience at NGMA about the “spooky” counter-intuitive properties of superfluids, such as their capacity to slow down light, the ideas were mirrored in the movements of dancers behind him. “This is the great pleasure of science: the defeat of our intuition with experimentation,” said Crook. “But the experiment is not the end of the story, because you still have to transmit that knowledge to other people.”

Can dance help transmit complex scientific ideas to non-specialists? The spell-bound audience on Sunday suggested that it could. However, the dancers of the Black Label Movement have gone much further than just mirroring science in recent years, under the direction of dancer/choreographer Carl Flink (University of Minnesota). The dancers use movement to brainstorm scientific problems, a method they call bodystorming – and draw artistic inspiration from science in turn. Carl Flink spoke on Sunday of his collaboration with biomedical engineer David Odde (also of the University of Minnesota), all of whom are now in Bangalore for a week-long Bodystorming workshop at the National Centre for Biological Sciences (NCBS). Odde and Flink met through the Institute for Advanced Studies at the University of Minnesota, through a shared interest in catastrophe – one in cells, and the other in dance. They have worked together ever since, exploring the dynamic environment within a cell through dance. 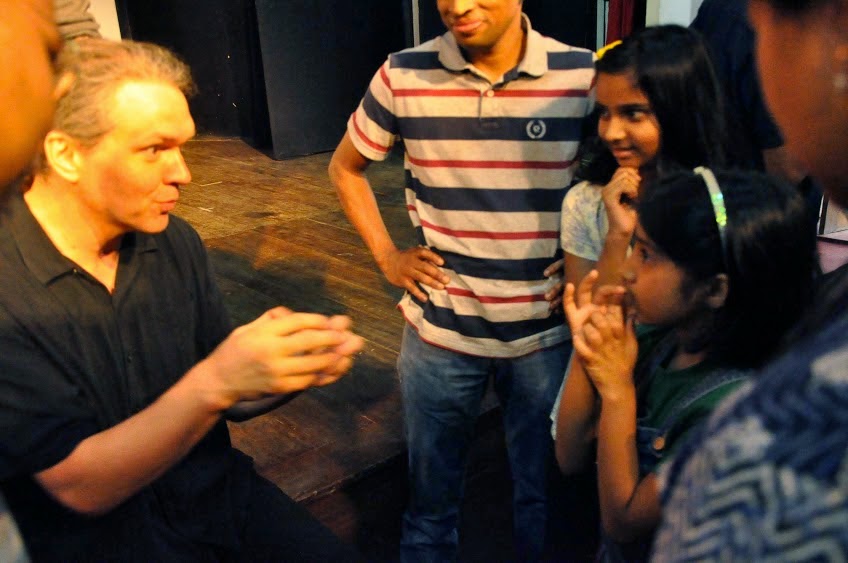 Dancers can only complement computer simulations, Flink asserted on Sunday – they cannot replace computers. What bodystorming can help with is intuition, narrowing down the potential avenues for exploration. “There are three doors you could have gone through, and now you know to go through door one,” explained Flink.

Satyajit Mayor (NCBS), who has helped bring bodystorming to Bangalore, spoke of how he gained a more visceral understanding of his research problems by seeing the dynamics of cell membranes acted out on a macro scale by the Black Label Movement at Woods Hole, Massachusetts last year. “We got a bird's eye view, and started to see patterns emerging,” he explained. The exercise also “sharpened one's own ability,” Mayor said, to break down a problem into a set of necessary mechanical rules.

The dancers, in turn, are inspired by the natural patterns that immerse them. Crystal Edwards, a dancer and choreographer with the Black Label Movement, said that bodystorming had changed her own creative process. “Instead of trying to make something happen, you set up rules and let patterns emerge,” she said. Likewise, Joseph Crook found the process of scientific collaboration stimulating, saying that it let him “think beyond the world of art for inspiration.”

Carl Flink, as well, looks to the world around him and sees organizing principles that inspire. “Whenever you look out the window you see so much motion,” he said. “I like to capture that in my choreography.”

What does he see so far in Bangalore? Flink admitted that he and the Black Label Movement dancers were mildly terrified by the city's traffic, on their way to NGMA on Sunday. But the more that he watched, the more order he saw in the interweaving vehicles. They were guided by one rule: “If you see the space, you take the space.” Flink illustrated his words with a weaving of body and hands, making even the chaos of Bangalore traffic momentarily beautiful.