(This talk was organized by Antara Artists Collective Trust along with Abstract Art Gallery in Bangalore.) 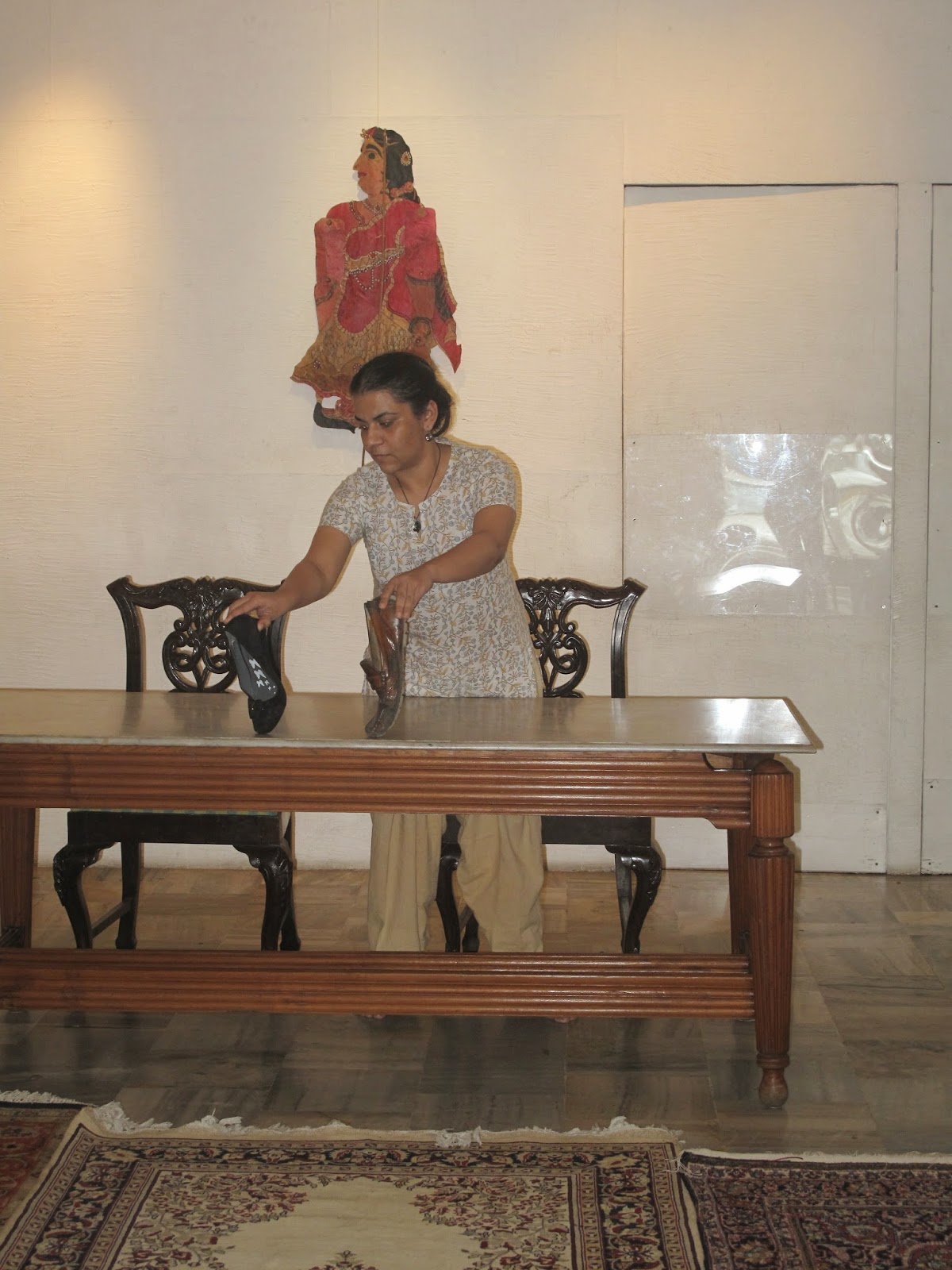 As traffic hummed with a post-lunch drowsiness on this Monday afternoon, a few people in the city, were making enthusiastic entries into Abstract Art Gallery to participate in a talk on the state of puppet theatre in India. Anurupa Roy, animated the silent afternoon with her passionate and critical perspective on the pervading imagination of puppetry in Indian society. Puppetry, she said, is fundamentally an art of bringing life to that which is inanimate.  It is this nature of puppeteer’s work that makes it a distinguished performing art, (she quickly demonstrated by making a couple of shoes speak). A theatre director brings characters and stories to life through human beings but a puppeteer labours to bring characters and stories to life through the medium of silent objects. Their art is to make silent objects speak through the literary devices of suggestions and metaphors. Movement (or stillness) is one of the basic phenomenon that “animating” depends on. Therefore, to make movements meaningful and suggestive one has to understand them. It becomes important for a puppeteer to observe and understand how her own body movements emote in order to emote correctly through the bodies of the puppets. This art of bringing silent objects to life is done in a way such that, the willing suspension of disbelief occurs as a double layered process in the mind of a puppetry audience.
1
1. The audience has to suspend the belief that puppets are not real characters (which also happens in regular theater.
2.The audience has to suspend the belief that puppets are dead objects (which is specific to puppetry) 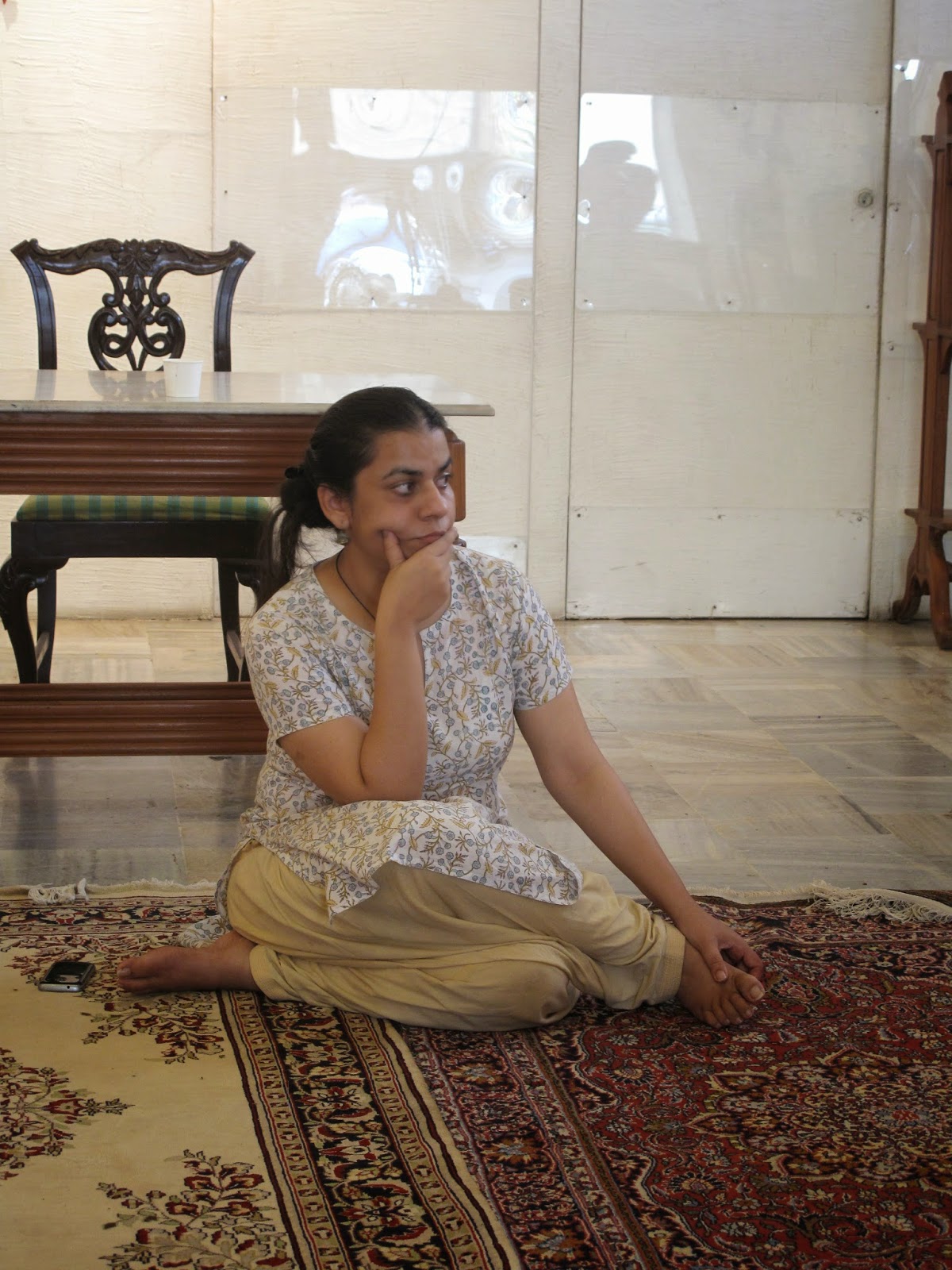 Thus, by offering a twice alienated perspective of reality to the audience, a puppeteer actually brings them that much closer to reality. Ironically this art that gives life to the lifeless is framed as a dying art. Anurupa insisted that we locate where this idiom of “dying art” is being generated. Largely, we can attribute it to be a state created phenomenon where with the advent of modernism, something monumental called the Indian culture was perceived to be disappearing and endangered.  Jammed between those whole held that Indian culture has to be revived and those who held that it has to be refined, Indian culture was definitely not to be left alone. Puppetry being a part of the Indian culture, like other art forms, came to bear the impact of India’s great nation building project. But what happened in the name of state’s divine intervention to save the arts is tragic. Especially in the case of Odissi shadow puppetry, state intervention actually endangered puppetry art by trying to refine it. In a lot of other cases, puppets from being objects of performance, withdrew into glass cases to become objects of preservation 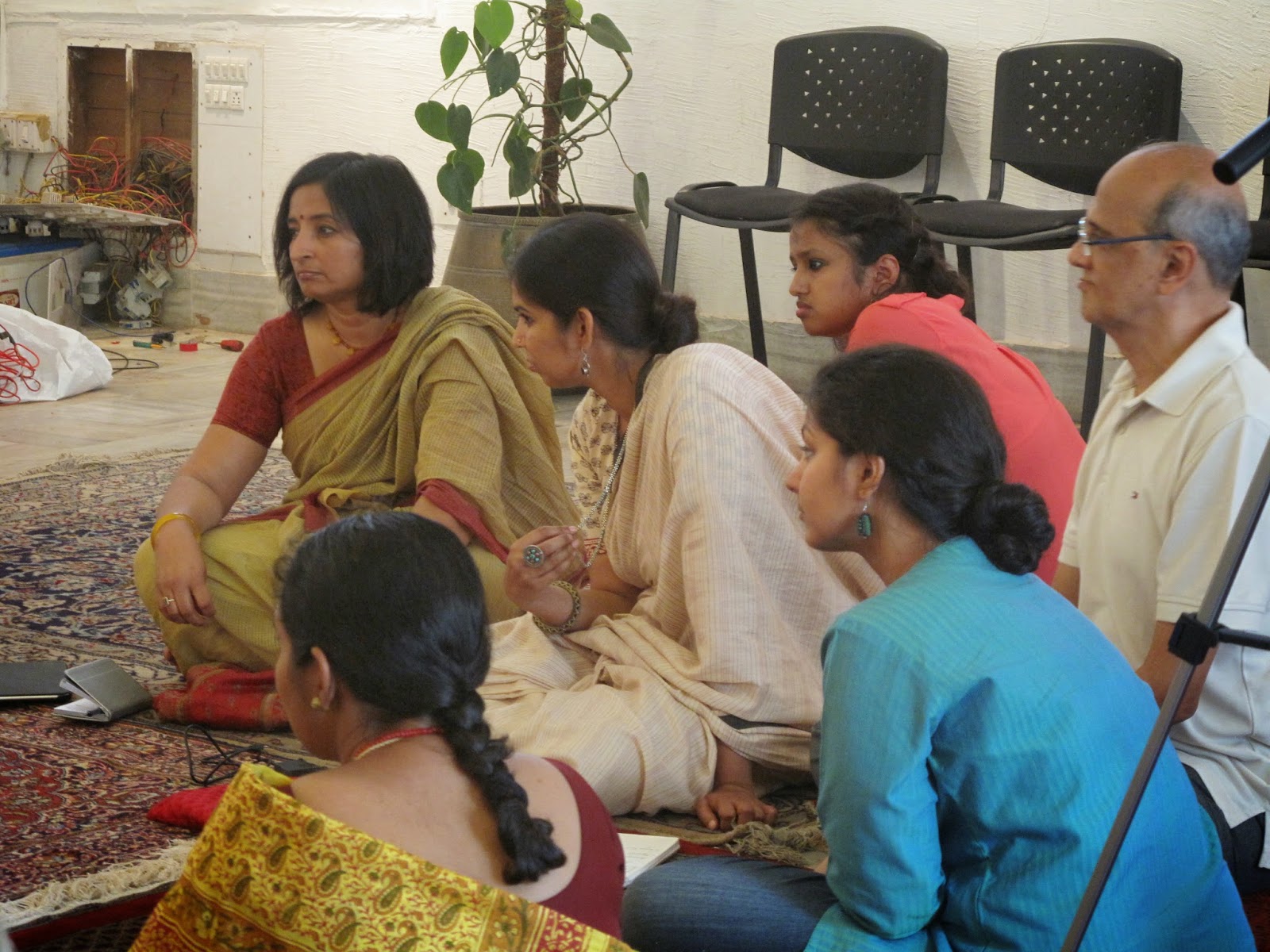 However, apart from the Odissi context, puppetry as an art practice is not endangered. What is endangered are the narratives that were performed. In a span of two generations the stories that a puppeteer would know has shrunk from 30,000 to 3,000. One can even compare and contrast the trajectory of puppetry with the trajectory of dance where “refinement” of certain dance forms lead to loss of variety in practices. Anurupa drew attention to the fact that there has been no census of puppet theatre in India for 30 years reflecting the hollowness of the claim that puppetry is a dying art.

In the contemporary context this “save the art”, idiom has taken the form of not just state intervention but also the form of well wishing corporates. A lot of capitalist firms bring art onto the stage in urban spaces under the tag of “folk art”. Dislocated from their contexts these art forms do not fit properly within the fabric of an urban society.  Due to this mismatch and lack of being able to make sense of this art in a relevant way, people are prompted to reaffirm it as “folk”. According to Annapurna Garimella (one of the participants and an art historian), any kind of engagement with puppetry (and other arts) within the system of capitalism gets framed either as paternalistic (saving the art form) or as developmental (bringing this art into urban spaces is good for the development of society). In either of the instances the relationship between the artist and the state/organization is unequal. It creates an illusionary relationship where one is doing a favour for another. Having problematized bringing puppetry into urban spaces does not imply that one has to necessarily visit the rural spaces or villages to experience and appreciate the art form in its “true” context. These art forms must be taught and practiced in urban spaces as well but not in a way that simply mimics and dislocates the art but in a way that is well contextualized to the changing needs and ways of the society.

The solution to salvage puppetry from all these pervading stereotypes and imagination is to bring criticality to the practice of puppetry. It is in this context that Anurupa situated her vision to start a school of puppet theatre where she intends to build a troupe of puppeteers who can critically engage with the practice of this art form. It is required for such schools to be built in our society because an individual, who does not belong to a puppeteer family, who is interested in doing puppetry has no organization to associate herself/himself with. Such people have to either be self-taught or join a school abroad where puppetry is taught systematically.  Largely a self-taught puppeteer, Anurupa had to travel a lot to different places to watch and learn the craft of puppetry. These experiences and perceptions will be the mud and bricks of the school she wishes to build. Contextualizing her dream she gave people more clarity to perceive it as a rising vision amidst all the stereotypes, policies, politics and the ideologies surrounding the art of puppetry.
Posted by Sammitha at 17:51